Guyana, a frontier market in the making
April 5, 2019by admin

Recognizing that its’ stock market can play a crucial role in the country’s economic development the Guyana government has announced plans to establish a modern capital markets infrastructure and revamp its regulatory regime.

If the country successfully implements its plans, it could achieve frontier market status in the near future – in similar vein to two other Caribbean countries, Trinidad & Tobago and Jamaica which are stand alone countries on the MSCI Frontier Markets Index.

While the Guyana Stock Exchange (GSE) was established in 1993, this is the first time any government has seriously considered its potential role in economic development and taken steps to modernize its infrastructure to keep pace with the rapid development of viable stock markets in more than 35 developing countries around the world.

Incidentally, the GSE was established in accordance with the objectives of the IMF’s Guyana Poverty Reduction Strategy, with the aim of encouraging and/or supporting the private sector to raise local financing for investment. At that point in time the country was overburdened by debt and its recovery was being supervised by the IMF.

Essentially, stock markets play a major role in mobilizing capital for corporations as well as governments to support their development initiatives. They also provide domestic investors with the opportunity to invest in listed securities and benefit from potential gains over time as the companies in which they invest grow.

As well, stock markets can be an attractive source of foreign investors who typically seek attractive investments outside their own borders. In the process, they can provide domestic companies with capital to grow their businesses.

Guyana currently has a small, underdeveloped and relatively illiquid stock exchange, with 16 listed companies which had total market capitalization of GYD$166.2 billion or approximately US$810 million at the end of December 2017. 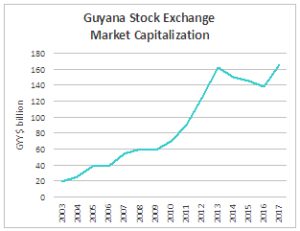 Since it was established in 2003, the market capitalization of the index has grown by more than 800%, and experienced only three years of moderate decline between 2014 and 2016 (See Table). This means that the listed companies have experienced healthy growth in their stock prices and investors in these companies would have made substantial capital gains, depending on when they invested in individual stocks.

More importantly, their regulatory, legal, disclosure, reporting and trading infrastructure is still evolving, making investment decisions challenging and difficult for global investors. That’s why, unlike developed markets, frontier markets are often categorized as a brave new world for investors willing to take the risk of investing in countries whose stock markets are now at a formative stage of development.

Arguably, while the risk of investing in these markets is greater, the rewards can be significant. Typically, investors who invest in frontier markets like Guyana benefit from what is referred to as the “first mover’s advantage,” that is, they get in when stocks are relatively undervalued and hold their investments for the long-term with the objective of realizing significant gains.

Incidentally, the GSE is well positioned to attract a flood of local and foreign investors should the government successfully implement its plans to modernize its capital market infrastructure.

In its 2018 budget, presented last November, the government noted that a limited number of financial instruments are traded on the GSE and that there are only a small number of participants in the market.

Currently, securities traded on the GSE are all equities and the government hopes to diversify its listings to include equity as well as debt securities. It hopes to develop a bond market and is awaiting the submission of an IMF report.

Typically, tradable bonds may be issued by the government as sovereign bonds or by large domestic corporations.

For foreign investors, bonds may be issued in local or foreign currency, usually the US dollar, British pound or some other major currency. In the global arena, there is a growing tendency for developing markets to issue local currency bonds which reduce the risk of a run on the currency, thereby facilitating currency stability and minimizing systemic risk.

However, while domestic investors might be comfortable with investing in local corporate bonds and government securities, foreign investors pay attention to factors such as a country’s and individual corporation’s credit rating and currency stability. Guyana does not currently have a global credit rating.

Beyond the issue of high-yielding sovereign bonds as a component of its proposed Sovereign Wealth Fund, and the listing of local government securities, it is believed that equity securities will continue to dominate the GSE for years to come. Notwithstanding, there is potential for local corporations to list bonds on the GSE, primarily for investment by domestic investors.

New securities listings may come in the form of initial public offerings by private companies seeking to go public. Arguably, one of the drawbacks of new listings is that Guyanese private corporations tend to be narrowly held and there appears to be a high degree of reluctance to diversify ownership.

In setting the stage for its modernization plans, the government recognizes that the legal and regulatory framework governing the operation of the securities sector has not kept pace with developments with global best practices.

As a result it plans to introduce a modern and comprehensive legislative framework to improve the regulatory regime, enhance investor protection and strengthen cross-border supervision and cooperation among financial regulators, in order to reduce systemic risk.

This will involve rewriting the Securities Industry Act (SIA) by the Guyana Securities Council. According to the budget, the new SIA will address the following areas:

Evidently, Guyana’s plans to modernize its securities markets infrastructure and its regulatory regime can put the country on the map to become a tradable market for investors globally.

Dwarka Lakhan is a pioneer in emerging markets journalism in Canada. His first emerging markets article, “Africa Joins Ranks of the Emerging,” appeared in Investment Executive, Canada’s leading newspaper for financial advisors, in September 1994. Since then he has written hundreds of articles on the full spectrum of emerging markets and has conducted more than two thousand interviews with emerging and frontier markets investment professionals.